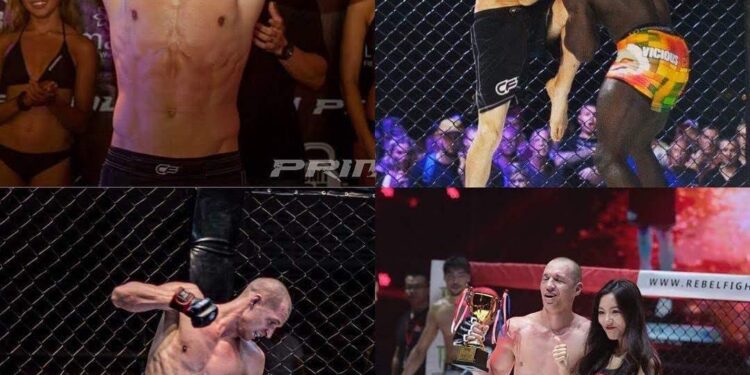 Jaymes Schulte life story in a nutshell. Born in California then my parents divorced soon after & moved to Wisconsin.  Both of them spent time in & out of jail my entire life.  I was raised by several different family members & I was always moving around & changing schools.  Eventually, I moved in with my aunt in Arizona.  I was a bad student due to lack of interest but I loved sports & did well at every sports school had to offer.

I bought 2 pairs of boxing gloves & would carry them with me & would challenge friends & strangers to box me so I could get more practice.  My skill improved quickly & in my next fights, I started knocking guys out in a fast & efficient way.

Soon I dropped out of high school & started selling drugs & school fights turned into street & bar fights.  This was the first time in my life that I had money in my pocket & I was so happy, I had a big smile on my face that couldn’t be wiped off.  I love dogs so I bought 1 male & 2 female expensive bull terriers to breed them & sell their puppies as a side hustle.

I started making a lot of money & I wanted to be big-time like Scarface but in the near future the UFC caught my attention.  I joined the best gym in the city, walked in confident & got my ass kicked by everyone in the gym & I was like wtf just happened to me.  MMA became my next obsession.

I started training every day & having amateur fights soon after.  I was much better at striking than grappling & would always win while standing but would often get submitted on the ground.  I got sick of living in Arizona & selling drugs so I moved to Hawaii & started a guesthouse business.

Rented 5 condos in the best luxury high rise & put 3 bunk beds in each 1.  I only rented to girls (mostly Asian) & had 30 girls paying me rent.  I would fuck many of the girls that rented from me.  Life was becoming easy & I was losing my motivation to fight so instead I spent my days picking up girls on Waikiki beach.  Occasionally I would make sex videos on my phone when the girls would let me & doing this saved my life 1 day.

1 night I picked up a semi-drunk Japanese tourist who was on vacation with her bf.  We fucked all night & I recorded some of it.  I dropped her off at her hotel & her bf was waiting for her in the room.  He asked her many questions & instead of saying she cheated she told him she was raped.

He called the cops & they came & arrested me.  I asked why am I being arrested?  Cops said because you sexually assaulted a girl yesterday.  Did I say which 1? I had 2 girls yesterday.  After sitting in jail for 24hrs the detectives interviewed me, I told them everything & showed them the sex video on my phone.

It was enough proof & they let me go free.  I told them I want to press charges against her & they told me there’s nothing I can do about it.  After this scene, my condo building wanted to kick me & my rental business out.

While in Asia, gambling on UFC was my main source of income but 1 day I lost everything & had to return to the USA.  I decided to go to California & rent a car from Uber.  I was desperate to save money so I would sleep in my car & shower at the gym.

1 day I was showing all my homemade videos to a friend & he told me this is gold, you need to make a website.  I had no idea how to make a website but eventually, I figured it out. I started stock market day trading with all the money TRAVELVIDS.xyz has made &  I’ve been living the dream ever since!