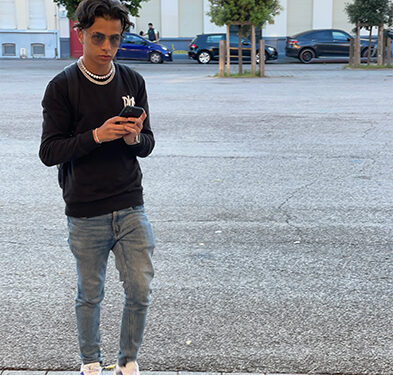 Maxens Gomez seems very cool but refused to take pictures. According to the songwriter. He claimed to be “too drunk” to take public pictures; this came after he brought in his party with a girl at Hotel Ritz in Paris.

The American sensation is yet to release an official song, but he already got 60k plays on Spotify for his interludes with 10,000+ followers.

Maxens Gomez looked good when he was spotted in Hotel Ritz, Paris. Maxens fans should be expecting something big to drop soon as he went to Paris for an appointment;. However, the details of the appointment are not yet clear to anyone and the exact location where it was held is also kept private, but we hope something nice is cooking – maybe an Album? Let’s watch and see.

When Maxens was approached after his party at Hotel Ritz, he declared himself “too drunk” to take pictures with fans; his fans around the venue begged to see him sing one of his upcoming songs, but he declined still.

Maxens was putting on blue jeans, a black Christian Dior sweatshirt, and rhinestone Louis Vuitton sneakers. Of course, he wore a couple of Gucci earrings, a diamond necklace, and a diamond watch.