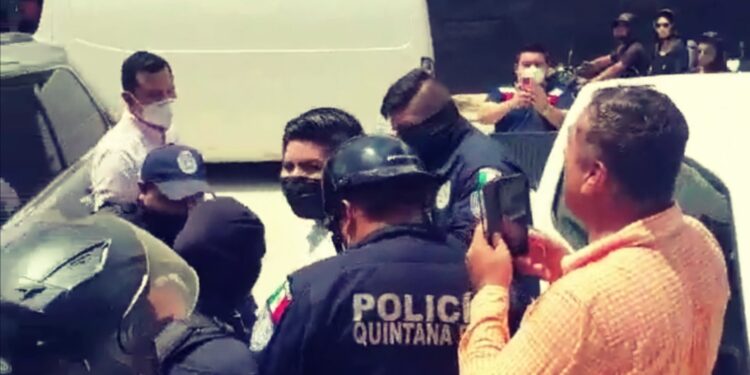 New cases of Police Abuse by directors of the PUBLIC SECURITY SECRETARY of the Municipality of TULUM, QUINTANA ROO, in collusion with the COMMANDANT HAFIT HUMBERTO MIRANDA García and the same Tulum  MUNICIPAL PRESIDENT Victor Mas Tah

The Federal Official ACTUARY of the COURT of JUSTICE JONATHAN ENRIQUE GARCIA VILA, was brutally attacked and who is still KIDNAPED by agents of the Municipal Public Security Secretary of TULUM, Quintana Roo and by private security elements apparently from Names such as Jamil Elias HINDI (bribery operator and main leader of the business of DISPOSAL of land in TULUM Quintana Roo RIVIERA MAYA), the former official of the National Agrarian Registry in Quintana Roo:

Antonino ALMAZAN ARTEAGA and businessman Jorge KAHWAGI Macari are apparently behind Of the bloody and unpunished acts, keeping the INVESTMENT and TOURIST ATTRACTION away from thousands of INVESTORS, they were exposed by the aggressors claiming that their protection is in high places and they are UNTOUCHABLE. We ask you to ACT please Mr. Quintana Roo Governor @CarlosJoaquin and President of Mexico Andrés Manuel @LopezObrador_ #Justice4Tulum

The level of extortion to businesses has reached its limit, the first level is a warning, the second leads to the kidnapping of people, partners or relatives, owners of small, medium and large businesses, to pay the official floor fee that the President Tulum Municipal Víctor Mas Tah and the Secretary of Public Safety and Traffic Commander Hafit Humberto Miranda demand. Fees start at $500 US dollars and can climb up to $25,000 US dollars per week, they are the best partner anyone wants to have.

You need an express service, to carry out a robbery or illegal eviction of land, they will gladly assist you. For the minimum amount of $100,000 US dollars, for every 1,000 meters of land and / or construction, you will obtain the full weight of the law so that all the violence of the Tulum Police officers acts. The opposite: You want to avoid a legal eviction the cost is the same. Great business in three years for the Municipal President and his Secretary of Public Safety.

Antonino Almazán Arteaga is a dark character in the Yucatan Peninsula. He was a delegate of the National Agrarian Registry in Yucatá But over the decades, he has been accused of violent or fraudulent dispossession.

The name of Antonino Almazán appears in notes on fraudulent dispossessions to ejidatarios since 2005, at least.

Antonino Almazán operated the dispossession of ejidal lands through deception, under the mandate of the former governor of Veracruz, Javier Duarte and the president of the Grupo Energético del Sureste, Carlos Mouriño de Atanes.

Splitting jungle for the Mayan Train

The latest accusation against Antonino is linked to the construction of the Mayan train. According to the Chiapas Paralelo allied portal, on January 17, “the Superior Agrarian Court ruled, by three votes to two, that the two plots of jungle on the border of the Sian Ka’an biosphere reserve, Quintana Roo , they were registered in the name of the businessman Antonino Almazán Arteaga ”.

This sets a dangerous precedent: the Mayan jungle is for sale. This ruling, contrary to the Agrarian Law, “will allow plots of land in the forest and put it up for sale in a region characterized by its extensive vegetation and biodiversity.” The note narrates that Almazán Arteaga is known as “La Muñeca” (“The Doll”) and is linked to the looting of at least seven ejidos in the Tulum Beach zone.

Antonino Almazán now calls himself a partner of Governor Carlos Joaquín and does not threaten the hoteliers of Tulum with taking away their properties, rather together with the Municipal President Víctor Mas Tah and his Secretary of Public Security Hafit Humberto Miranda, they have stripped with false documents a dozen of owners who have even been kidnapped until they demand that they leave the country.

Jamil Elías Hindi is the “untouchable” businessman today, he has survived controversies not only because of his alleged political relationships, but also because of the allegations of being related to organized crime in Sicily.

For almost a decade, his bank accounts have been “seized” on different occasions, and now he has resurfaced as the “strong man” of the municipal president of Tulum, Víctor Mas Tah, since there is no construction or land use license that does not pass through his authorization.

From the taqueria “La Salsería”, located in front of the Urban Development Directorate in Tulum, it happens every day; there Elías Hindi dispatches without having any position, but with all the power of the municipal presidency of the most important tourist municipality in Mexico.

Since 2014, the authorities proceeded to “the assurance of their bank accounts by the Specialized Unit for Investigation of Operations with Resources of Illicit Origin and Counterfeiting or Currency Alteration (UEIORPIFAM) of the SEIDO dependent on the PGR (now FGR); (and) confirmed the links of a group of 16 businessmen from this tourist destination (Playa del Carmen) with organized crime, in their aspect of “money laundering”, belonging to an alleged cell of the Ndrangheta –the Calabrian mafia– in international alliance with “Los Zetas”, among which stands out the president (now former president) of the Association of Small Hotels of Playa del Carmen, Jamil Elías Hindi. ”

Known by all, a partner and close friend of the Romanian Florián Tudor, who along the Fifth Avenue of Playa del Carmen, the hotel zone of Cancun and restaurants and nightclubs in Tulúm, have filled ATM’s where they clone all the banking information of innocent users .

Where waiters, cashiers, managers and owners must give Jamil Elías Hindi 16 or 17 credit card or debit card numbers, expiration date and CCV to defraud thousands of tourists every day. Now from the hand of Antonino Almazán they are the masters and lords, with his partner Florián Tudor in jail, he is the new Lord of the mafia in Tulúm.

Tarik Freitekh on Film Making as an Art