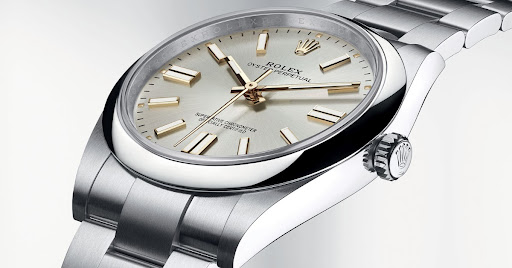 What is the History of the Oyster Perpetual 41mm?

The Oyster Perpetual was first released in 1926, and it was the world’s first waterproof wristwatch. Rolex, in large part, built a significant amount of its reputation at the time from the promotion and sales of this watch. And even though it may not be as ubiquitous as the Submariner or the Explorer, the Oyster Perpetual still holds a deeply significant place in the history of watchmaking.

There are three unofficial hallmarks that are considered trademarks of the Oyster Perpetual series – the precision of a chronometer, the patented waterproof Oyster case, and a self-winding movement that is powered by a perpetual rotor.

What Are The Technical Specifications of the Oyster Perpetual 41mm?

The Oyster Perpetual 41mm measures, as its name implies, 41 mm and is encased in Oystersteel, which is Rolex’s proprietary material for crafting their watch cases and bracelets from. The watch is also water-resistant for up to 330 feet, which stands to reason, as this is one of the newer entries in a very distinguished line of waterproof watches. The watch also has a power reserve of 70 hours, which is on the longer end of the scale for a luxury wristwatch.

From a technical standpoint, one of the most notable things about the Oyster Perpetual 41mm is its movement, which is the Caliber 3230. The movement was released by Rolex just this year and, because its crafting was so technically complex and innovative, several new patents had to be filed by the company as a result.

This new movement provides significant improvements over its predecessors in several measures of efficiency and reliability, including its power reserve length, accuracy, precision, as well as resistance to shocks and magnetic fields, which is becoming increasingly important nowadays with the continuing prevalence of technology throughout the world.

One thing that is immediately apparent about the Oyster Perpetual 41mm is that, while the watch is very beautiful and elegant, it is not, by any stretch of the word, “opulent” in any fashion. This is likely because when these watches were first produced, wristwatches were, quite literally, a relatively new invention.

This meant that it was important to attempt to keep the price down as much as possible so that more people would be interested in purchasing one. The result is a watch that today has what we would call a very “minimalist” style, which many people treat as a recent development, though in this case, its roots hearken back to design inspiration from the last century.

The Oyster Perpetual 41mm has a dial that is available in two different colors: silver, or black. The dial does not have numerals of any kind on the face of the dial, instead of using a series of hash marks to delineate the time. At the 3,6, and 9 o’clock positions, a series of two hash marks have been placed instead of the singular markings that are seen around the rest of the dial’s face. 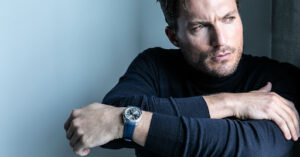 What Are The Best Rubber Watch Straps For the Oyster Perpetual 41 mm?

Before we answer that question, it is important to pose another question – why choose a rubber watch strap at all for your Oyster Perpetual 41mm?

The Oyster Perpetual 41mm is, first and foremost, a dive watch, and rubber is the only prominent strap material that will give you the level of waterproofness you need to maintain an active lifestyle.

Rubber B proudly offers a rubber strap for the Oyster Perpetual 41 mm in our Solid style, which is available in five different colors.