The True Meaning Of Christmas From The Perspective Of An Alien 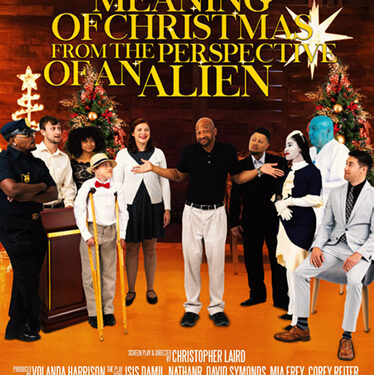 Rarely have I witnessed a stage play that brought so much entertainment in quite a while. “The True Meaning Of Christmas: From The Perspective Of An Alien,” was truly one of those performances that I thoroughly enjoyed. This stage play is an adaptation of sci-fi author Christopher Laird’s short story. The play was a brilliant blend of tremendous singing and storytelling. I was engaged in the entire performance.

The story is about an alien woman named Xona Bari(Isis Damil), who comes to visit her wealthy boyfriend, Monty Herrshoff(Nathan R), on Earth during Christmas time. Xona is baffled with the holiday by all of the decorations in his home. She has come to tell him something that will change their lives, but instead, Monty cuts her off wants to show her what Christmas is all about.

Xona comes off as this grumpy, mean alien woman who constantly says the humans do not value the true meaning of Christmas, but “engage in blind folly” as she puts it. They both go through this hilarious sequence of events finding out what Christmas means for them. From getting into a scuffle with Santa(Santa Randyl) to getting educated by a funny and annoying security guard(Rahim Shahid), there is such a well-measured blend of education, comedy and singing.

Monty Herrshoff(Nathan R) singing Thurl Ravenscroft’s “You’re a mean one, “Ms.” Grinch,” was a perfect song to describe Xona and to push the story forward. Author Christopher Laird also took the role of director for the production and did a wonderful job of steering this ship.

Isis Damil, who played Xona Bari, is a talented singer and played her role exceptionally well. I enjoyed her performance. I had to read the book to learn more about these interesting characters. Xona is truly grumpy, painfully blunt and seems to never be happy…but she was funny, and that’s what I loved. Isis Damil played her role convincingly and had good chemistry with fellow singer NathanR.

The True Meaning Of Christmas: From The Perspective Of An Alien, has the potential to be a Christmas classic right up there with Charles Dickens’ “A Christmas Carol”.